My Own Personal Pug Paradise

Look how long it's been since Mom wrote in our blogs! It's really been hectic around our house with the move, Mom's severe attack of clumsiness that resulted in all the hospital stays. I don't like when my Mom is gone and I will admit, with my head held high, that I did throw a few fits over it and well, at times made  Sister Girl and My Boy get down on their knees and beg for Mom to hurry and get well. I wasn't that bad but I did think that every car that drove by our house had my Mom in it and then it was major let down and pug scream time when they didn't. OK, maybe I was a LITTLE hard to handle, but that is as much as I am willing to admit. 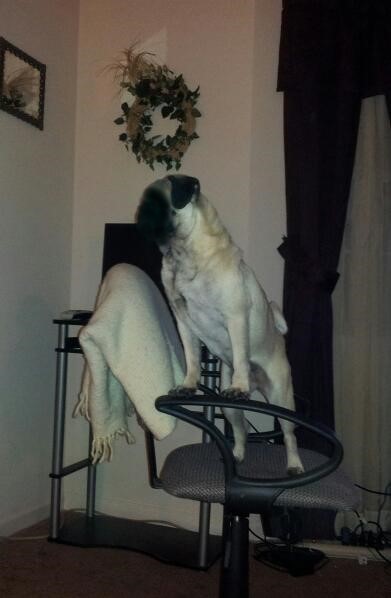 This is me running to jump in the chair to see out the window every time a car came by. I just knew my Mom was in one of those cars. Notice how the Two Meanies pulled the chair out several feet from the window? That was to keep me from hurling myself at the window when I figured out the car was passing by and not letting my Mom get out. 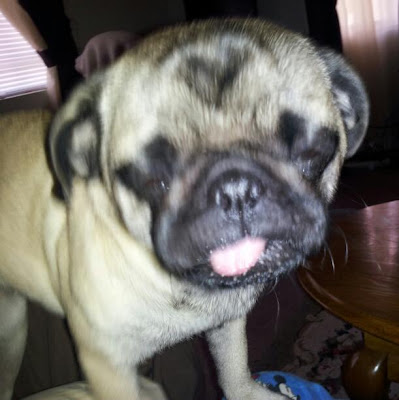 This is pretty much how I felt while Mom was gone. 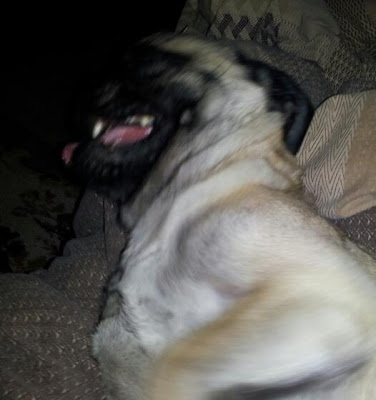 But My Boy and Sister Girl could always cheer me up with a belly rub. 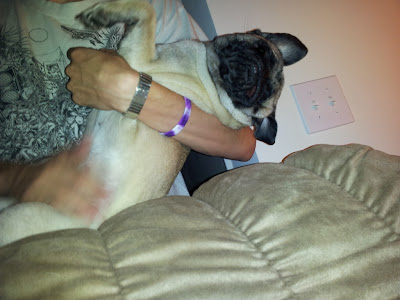 I do love a good belly rub! 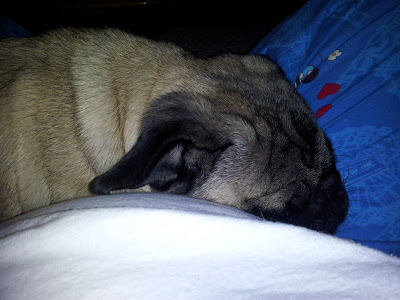 Then Mom came home and I would not leave her lap, which was OK cause you talk about somebody spaced out on medication, the woman couldn't take a straight step for days so she was pretty much couch bound. Which just happens to be my favorite place, on the couch in Mom's lap, soaking up the love. Best sleepin' EVER!
Then as I was laying there dreaming, minding my own business in Mom's lap, I got to thinking about Turdley Tucker and his man cave. So I decided to make my own man cave, only I decided to called mine Pug Paradise, cause I'm telling you that being in that cave in my Mom's lap was nothing but paradise! 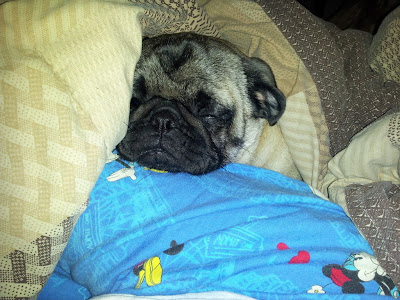 So I slipped in for a quick nap, but making sure my head was out so I could still observe the household if anyone or anything did anything that needed my attention. 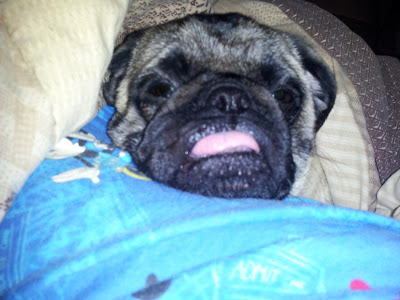 At first I wasn't too sure and still needed to be out far enough to be able to see Mom and be ready to move quickly in case she made a stumbling trip to the bathroom. It's kinda my mission in life to make sure she never again has to go the bathroom alone. But when the tongue started to slip out I knew I was losing the battle and drifted off for a nap. 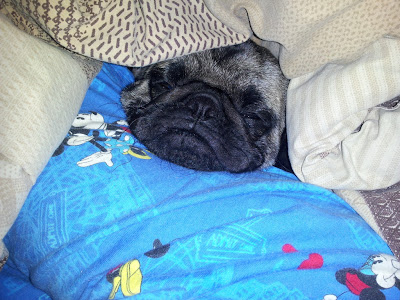 In my sleep I scooted a little farther back into Pug Paradise and found it quite comfortable. 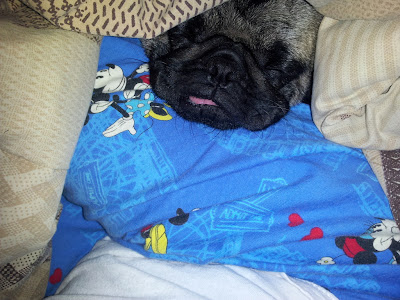 Soon the tongue was out again and I was out like a light for a couple of hours. In my Pug Paradise. I can see Turdley Tucker's need for the Man Cave now. Maybe he isn't just fur and bones filled with nothing but air after all. I mean if he knew about the Man Cave thing he has to have at least one neuron firing, at least intermittently. If he ever fires on two he will discover what I have already figured out. Man Cave or Pug Paradise, either is much better if built in Mom's lap! 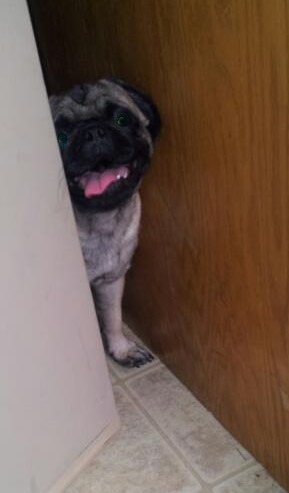 Uh, I would let you in for a visit but I hear Pug Paradise calling my name and I'm getting rather sleepy. Maybe another time.
On a quick note I must point out Mom's choice of pajama's. Can you believe it? A grown woman wearing Mickey Mouse sleep pants. I guess they are an improvement over the Pee Wee Herman and Sponge Bob Square Pants ones she seems to favor and I should be thankful instead of slightly embarrassed. I do apologize for her poor taste in pj's.