I Suffered, The Angels Came and I Conquered!

Ok, so we all know that I went in for another treatment last Thursday. Now that wasn't so bad, I slept through the whole thing. After I woke up they put me back to sleep, so why did they wake me up the first time? But the next time I woke up they didn't put me back to sleep but gave me some good drugs. I can understand now why so many Pugs turned to LSD in the 60's. So I spent the first day and night and the next day floating in and out and just enjoying myself, dozing off and on, having great dreams about Stan Milhous but eventually that stuff wears off. This is what happened when it wore off about 6:00 pm :

The first thing I saw was bars, now we all know I have done a little time for a few indiscretions in my life so bars are no stranger to me, but I also don't consider them my friend as many do, Turdley Tucker being one of those that love, love, loves his crate. Did I mention he also has the IQ of Joe Giudice?  Who I also suspect has been familiar with a few bars in his time. So I wussied it out some and started to whine, I am not proud of it,  but it's a fact.

Then I looked to the left and there was another occupied jail cell, I didn't know what that thing in it was but it was big, Mom told me later it was called a Doberman, she never told me what his crime was that landed him in the clinker. So I decided a little barking might be in order. That thing looked strong enough to break through those bars at any moment and get me.

I turned to the right thinking there might be another pug who could help me fend off the black monster. OMD this one was even scarier, Mom told me it was a corded poodle. I couldn't figure how why they had their mop locked up in a cage, then I noticed their mop had eyes. Now our mop at home doesn't have eyes so I am not afraid of it, but this was a different creature altogether. I also knew instantly that I wasn't going to get much help from that thing. I decide to kick it up a notch and howl some, that should have gotten some attention from the nurses there and a quick rescue should have been initiated at that point. A nurse appeared all right, what a relief, she opened the cell door and gave me some love, talked very nice and sweet, telling me everything was going to be alright and I would see my Mom the next morning about 8:00 am to just hang in there. She gave me a little shot to calm me down and I had a few more hours of floating and having nice dreams. At one point I might have even flirted a little with the black devil in the cell next to me, or it could have been the mop, I can't be sure. Unfortunately for me that stuff wore off too about 10:00 pm. All at once neither the mop or the black devil looked quite as sexy as they had, they were scary again. Then I looked across the room, more cells and more creatures, not a single pug ally in the bunch. I was on my own. I sure could have used some of ole' Hanklin's experience about then. I kept closing my eyes and telling myself, all my angel friends are here, they will protect me, they won't let harm come to me. That lasted about 10 minutes and then it hit me, I'm not sure how long it takes them to get here from the Rainbow Bridge, what if they don't make it before one of these creatures gets me? So I howl again, only louder this time. It got me the good stuff the last time, maybe it will work again. It got me the nurse and the loving alright but not the good juice, she said I had to be good and awake so my Mom could pick me up the next morning. Uh.... excuse me nursey but you do realize this stuff wears off in about 4 hours and it is only 10:00 pm, don't you?  So by my calculations I have two more times of the good juice and two hours to sober up before Mom gets here. So common, shoot me up with the good stuff again! Nothing, nada, zip, she wasn't buying it, just gave me a lame pain pill. Now I am not knocking the pain pill, it kept me from hurting, but it doesn't compare to the good juice. She gave me a few more rubs and kisses and told me to relax and then I heard the "clank" of the door again and she was gone. I took a short nap brought on by the lame pain pills, maybe about two hours and then I was awake again.

Then I hear Hanklin's voice in my ear saying "You know what you have to do little buddy, no more time to waste, this is war and you have to win" and I heard Payton telling me "Listen to Hank, he knows what he is talking about, he has been to war before". Then Tuni says "But the nurse is wearing pink and really sweet, maybe you should give her another chance", then I hear little Charlotte saying "Maybe you better listen to Tuni, she has been around a long time, she knows more than we do" Gracie was there and she sided with Tuni and Charlotte. But Yoda, well he tells me "Girl, you better listen to Hank and Payton, they know what a good fight is all about, you have to be winner, no time to be nice" Then I hear the rumblings of the Houston Pittie Pack coming and it all becomes clear, would they put up with this nonsense? Of course not! I knew just what to do there, surrounded by my friends. I pug screamed, started of slow and low and let it build until it was a full blown scream attack. I think I saw Hank and Payton smiling at me and gently nodding their heads.

4:30 am Mom's phone rang, she arose from the zombie sleep she enters, you know the one with her mouth hanging open and unrecognizable noises coming from it? She saw the name of the Vet and almost had a heart attack, as soon as she answered she claims she knew exactly what was coming next from the sounds in the background. The nurse tells her "Lola is doing so good that I am 100% positive she is ready to be released, would you like to come pick her up now?"  Translation:  "We can not shut this little bitch up would you please come and get her, she has half the place in an uproar and I can't stand another second of it". Mom said "At 4:30 in the morning, I am suppose to pick her up at 8:00 am?"  The nurse replies "Oh, I think she misses her Mommy and can't wait that long to see you." Translation: "If you don't get here soon we can not guarantee her safety, some of us are already to the snapping point." Mom could tell by the begging sound in her voice it was desperate so she gets up and goes to get me. You noticed I left out any part of getting dressed, didn't you? Yeah, my Mom shows up at the Vet in lime green flannel pajamas with monkeys all over them to get me. That was  like major embarrassment! 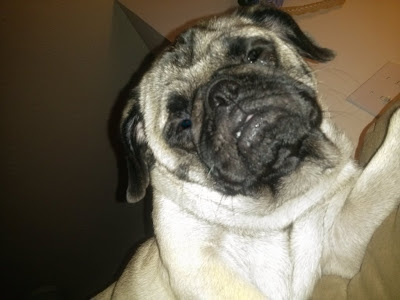 Me after a pain pill. 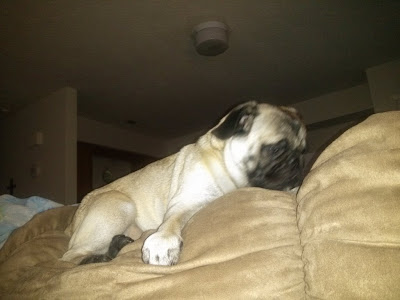 Yep, still feeling the effects of that pill! 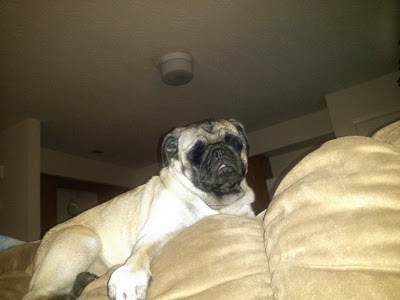 Waking up a little 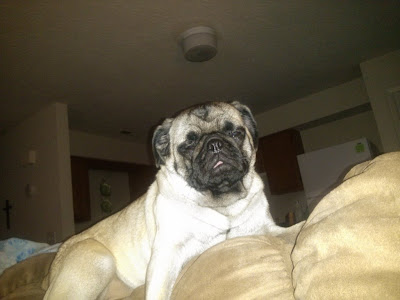 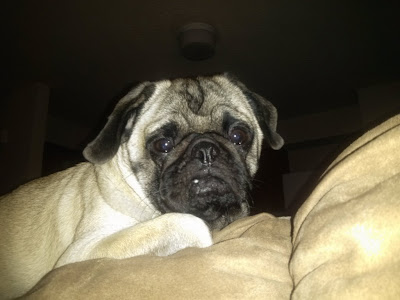 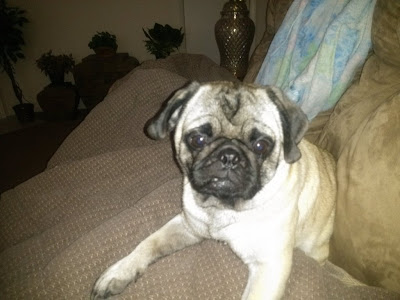 Sobered up pretty fast when I fell off the back of the sofa. 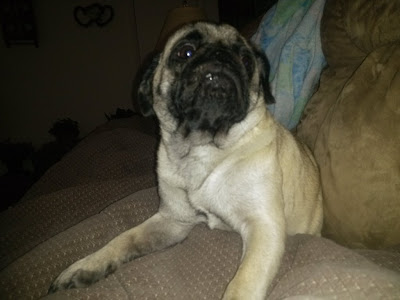 How the hell did that happen anyway? 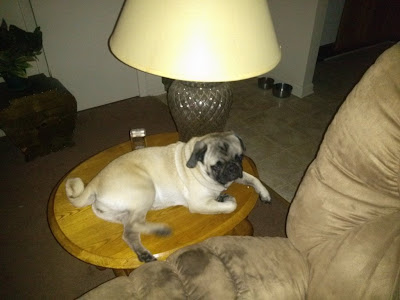 I'll just move on over to the table, maybe it won't move out from under me. Oh my, how embarrassing, you can see my slobbers on the arm of the sofa!
Now I have learned a new trick, Mom isn't sure how I picked it up and no one in this house is fessing up to teaching me. My lips are sealed. In this video she foiled my attempt but you will see what I have learned to do: 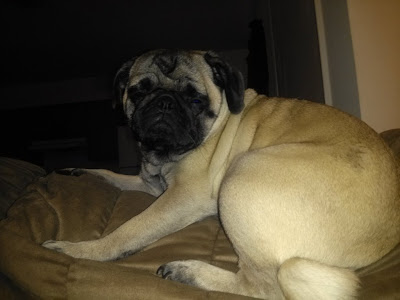 This is what I think of her attempt to spoil my fun!