As you all know I know I have a Grammy and along with Grammy came a new cousin, his name is Stan Milhous and I want to introduce you all to him. Don't you just love extended family?  He is one dapper looking fellow. My Grammy loves Stan like there is no tomorrow and after you look at his pictures you will see why. Who wouldn't love that expressive face? Mom says she thinks Stan looks a lot like me, which we all know means he is beautiful. All I know is I am so very glad that Stan has my Grammy too, because she is one special lady. 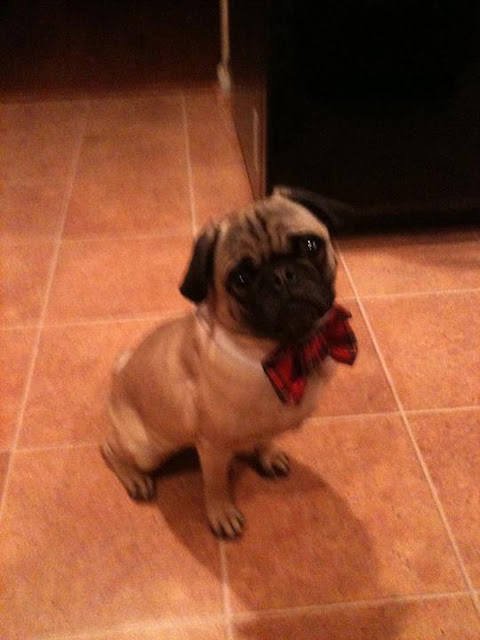 Not really sure where Stan's thinking is here, he is either thinking "Hey, look at me and see what a dapper gentleman I am!" or he is thinking "What in the world are they doing to me now?" I will have to ask him and get back to you on this. 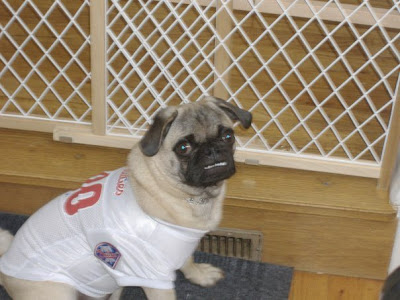 Have you ever seen such beautiful teeth? I do love a man that is not afraid to show his teeth like this!
I am not sure what poor Stan did here to get thrown in the slammer, but we don't judge him because at one time or another it seems all of us pugs end up in the slammer for something. My Grammy says Stan is a real gentleman, I think maybe he could teach me some manners, Mom says the terrible two's don't just apply to children, she knows now they apply to pugs as well. Unfortunately the vet backed her up on this so I really have no defense for my behavior now. 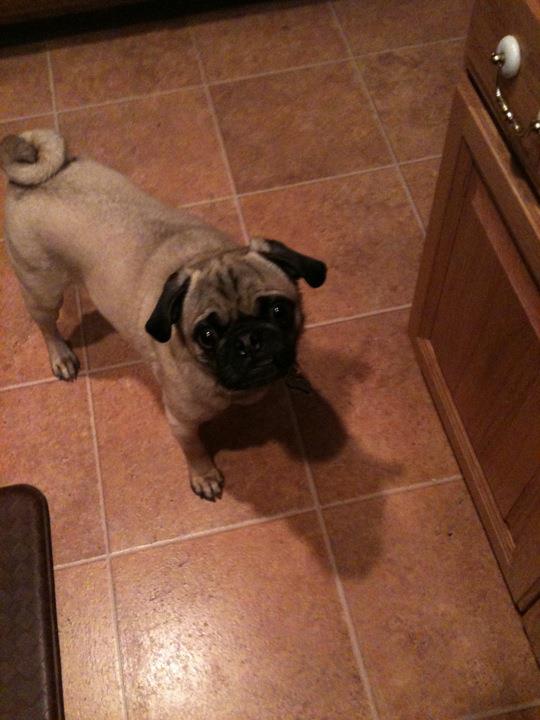 See how nicely he is waiting on his cookies to get done? He calls Grammy Mom-Mom and she was making him cookies. He is one lucky pug to have those home-made cookies. Mom keeps saying she is going to try to make me some but....well....let's just say I have a few reservations about her dog baking abilities. 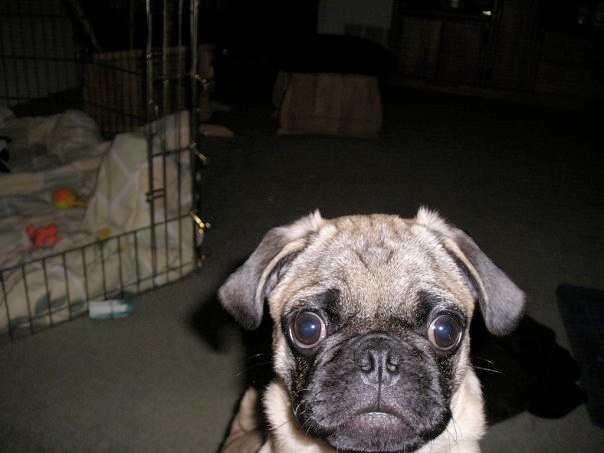 I am not sure what is going on here but it is my favorite picture of Stan. It does have the ring of "mug shot" to it and I do see another jail cell in the background. I am going have to talk to Grammy about this and find out the story, cause my poor Stan looks a little scared and we all may have to form a gang to go rescue him.
Now tell me, is this not one beautiful pug? I think he is.
I wanted to tell you a little about my treatments, there has been a lot going on here and Mom's been kinda down so she hasn't been up to par on the blogging as she usually is. The last treatment went so well and I was able to go an extra two weeks without any help with my clotting, first time since treatment I have been able to do that. The vet is sure a cure for me is right around the corner or at the very least I will be able to finally maybe only have to have a treatment once every year or two. I was finally able to go outside for a walk and it was heaven until some hound dog howled and scared the bejeezus out of me. You guys ever heard one of them howl?  It's the stuff nightmares are made of! Anyway, this week I was suppose to have another treatment and they wanted to move the port, the vet thinks it is getting clogged because it isn't placed just right. Mom's nervous and scared because they have to put me to sleep again to do it but I will be fine. I am tough, a super hero in pink! I don't think I am having my treatment next week though, it may have to wait another week, Mom went to the store this morning and a tire blew out, it can't be fixed and the guy told her she has another one about to go also and the other two aren't far behind. So she is going to have to wait until next week for payday to fix the one tire and in the meantime she is running around here sniffling and snuffling and  mumbling something about a wing and a prayer on the other three tires and one step forward and two back. Why in the world is the silly woman taking one step forward and two backwards, doesn't she realize that isn't going to get her anywhere very fast? Geez...sometimes I wonder about the wiring in her head.
Good news, well for Mom anyway, I am not so sure about it yet. Mom has been working really hard on my leash training. There are so many exciting things outside that I just want to see them all and have a tendency to run ahead or try to run circles around whoever has the leash. Mom pulled out the whole "Your going to listen to me Lola" game, only this time she mean business. No amount of kisses, tilted heads or cute looks backed her down. It was like a show down at the OK Corral. I stood my ground as long as I could, I will even admit to a small amount of whining. She came out like Predator and said "Not this time little lady, you will walk on this leash right or you don't walk at all". I'm a little stubborn so we didn't walk at all for quite sometime, just stood there on the sidewalk looking like idiots, but then I realized Mom doesn't really care if she looks like an idiot so this could go on forever and sometimes you just have to give in. Yes, pug buddies, I caved, gave it up, turned yellow belly. I walked very nicely beside and slightly behind her for the whole walk! She called it a miracle and a victory. I promptly came in the house and totally destroyed Tucker's bed. Hey, I had to hang on to my reputation somehow! She left me no choice. Mom's all like "Don't you feel bad, now Tucker doesn't have a bed", I'm all like "So, who cares?", then Mom's all like "Look how sad he looks!" and I'm all like "Mom, he's a Chupacabra, he doesn't even need a bed, they're like wild or something". I may be walking on that leash properly, but I still have my street cred!

Email ThisBlogThis!Share to TwitterShare to FacebookShare to Pinterest
Labels: Stan Milhous, treatment, walking on the leash