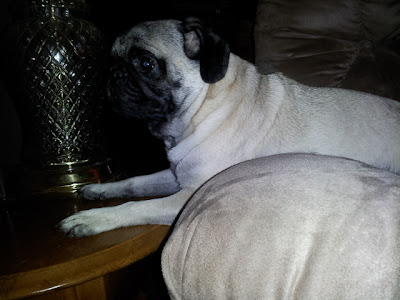 So this is how it happened. Mom changed my vet because she found some very troubling news about mine and Tucker's treatment and immediately got us out of there and to a new vet. I really like the new vet, but I'm not so sure about this building he has beside his office. See when we pulled up there was this strange looking building and I was feeling really sorry for those poor things in that giant crate.  "OK Mom, so it was a pen, geez....let me tell it my way."  We all know I have a few issues with crates, well actually barriers of any kind, haven't found one yet I can't go under, over or headbutt my way through.

As we were leaving my new vet walked us out to the car and I wanted to go tell these creatures how to get out of that "pen" so I pulled and pulled on the leash trying to get there and the vet told Mom to let me go that the creatures were all healthy and belonged to him personally, he had them in there close to his office so he could make sure the Mama's were letting the new babies eat like they should. So I ran over all excited, my tail going every which direction and stuck my little flat face right between the bars of the "pen". One of the Mama creatures noticed me right away and came right over. She was a big one but I wasn't going to mention her weight issue or the fact that she was as tall as a Yeti, I mean, that really wouldn't have been polite since she was a new friend and all. I thought maybe after we got to know each other better, over tea and Reese's Puff's, I could give her some pilates or some exercise pointers. She leaned down and stuck her face right up against mine, she had a very soft but wet nose, another issue I planned to bring up with her later. Then she licked me, now I have a tongue, I have a really big tongue, but this Yeti had one that made mine look like Tucker's almost non existent tongue. But that's OK, I'm cool with kisses from anybody. Then she stuck her nose up against my face again and let out this very loud Moooooo! Let me tell you I jumped almost as high as that "pen" and was trying to run at the same time so I was already in gear when I hit the ground running in the opposite direction. I pulled the leash out of My Boy's hands and the vet said I would have put any Greyhound to shame with my speed. I ran as fast as I could back to the door of the vet's office, just my luck it was glass, very clean glass. I don't think it made my face any flatter when I smashed into it, at least Mom says she can't tell any difference.

I look back to make sure someone was coming to rescue me and what did I see? Mom, the vet and My Boy all bent over double and laughing! Yeah, they laughed at me, that Yeti was going to get me and they were all laughing. I had no other option but to pug scream, that brought Mom running because then she thought I was hurt by smashing into the door. The vet assured her and me that I was not dying that I was just being a little dramatic. Dramatic?! Are you kidding me? A Yeti tried to eat me, I smashed into a glass door, there was no one to rescue me and I am being dramatic? I don't think so!

So furkids of all breeds if you hear that Mooooo then run because it's going to be a Yeti coming after you and it will eat you. "No Mom, it wasn't a cow, it was a full blooded Yeti!  Since Mom seems so determined to interrupt my story I'm just going to end it here and leave you with the warning to watch out for Yeti's, they are big, they are loud and that can't be a good thing!