I Need Someone To Make A Call For Me! ASAP

I have tried to call myself, but I'm sure by now you have all noticed my size 16 feet, they don't dial well. I need someone to call Dog Protective Services (DPS) for me immediately. There are things going on in this house that I considered abuse and neglect and needs reporting.

1.    Mom took the clothes out of the dryer AFTER they cooled off, she knows better, she expects me to help her with laundry then the clothes better be warm.

2.    Mom didn't pick out the little stick looking things in my food, she knows that is her job. She actually had the nerve to tell me she didn't feel good and to eat around them for a change. Now I know her Fibro/Lupus is acting up but that is no excuse for expecting me to do this. It has always been her job not mine.

3.    I was not taken for a walk today, she said it was too hot for me to go outside. Hello! Has she not heard of water? She could fill up a spray bottle and walk behind me spraying me down from time to time to keep me cool, or attach a mini fan to my collar. Something. Anything.

4.    She let Turdley Tucker tear up one of my toys, she said it was by accident but with all the other abuse going on I am doubting her explanation.

5.    She made me get out of bed way too early this morning, telling me I had a vet appointment, only to bring me right back. I didn't see the man so I suspect that was a story to torture me too.

6.    She got on to me for taking the comforter, blankets and all the sheets off her bed. Is it my fault I like to lay on a cool mattress? I think not.

7.    She would not give me all four pillows from the sofa to lay on, said I only needed two of them and she would have two. I wanted all four of them.

8.    I got on the table and broke one little candle holder, she acted like the zombie apocalypse was upon us, fell apart and gave me a good talking too. Mumbling something about things like that wouldn't happen if I would learn to stay off of tables, blah, blah, blah. I never listen to all of what she is saying.

9.   She made fun of me because I was afraid of the cotton candy. Come on now who wouldn't be afraid of that stuff, it's there all nice, soft, pretty and looking delicious then you put it in your mouth and POOF! it's gone, instantly. Something  is not natural about that and I want nothing else to do with it or the bag it came in.

10.  She forgot to put my clean paper down this afternoon. She knows the routine, one in the morning, one in the afternoon and one at bedtime. But I had to suffer because of her laziness and *gulp* use the same paper twice. That is not sanitary and I am sure she is breaking some kind of  city code.

11.  She let My Boy spend the night with someone last night. She KNOWS I don't sleep well without My Boy being in the house.

12.  She did not share her french fries with me. I was looking all cute and everything. She is a cold hearted,woman!

13.  I did not drink the whole cup of coffee, I left almost a half a cup for her. But did she appreciate the fact that I thought to share it, no she just concentrated on the part that was missing.

14.  I accidently knocked the whole sofa over, I did not do it on purpose. I was doing the Pugtona and decided to practice little parkour while I was at it and bounce off the back of the sofa. How was I suppose to know the whole thing would flip?

16.  She held me up in the mirror beside her, said it made her feel better since I have more wrinkles than she does. That was a direct insult on my beauty.

17.  She brought in this stray dog the other night, we can't have more than two where we live so she operates like the underground railroad, in after dark and out before sunrise. Now I have to admit it was a cute little thing but had a temper like Turdley Tucker. They got along great, but I didn't like that dog any better than I like him. These things should be cleared with me first.

18.  She laughs at me for trying to catch flies in mid air. The joke is going to be on her if I ever do manage to catch one of them.

20.  Then we have the improper use of toys, I personally think this would qualify as animal abuse and should be turned into the Nancy Grace show for further investigation and I want Judge Judy to be the judge when it goes to court. 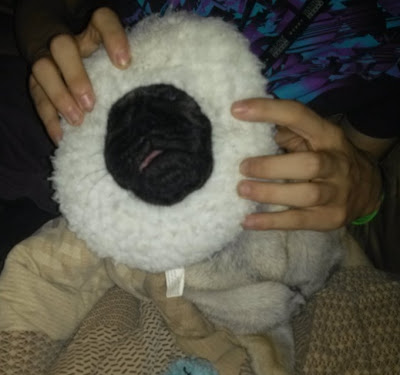 Then we have a little matter of the embarrassing things she does:

1.    Her cell phone is in a, I hope I don't gag as I write this, pink rhinestone case. Trust me Paris Hilton she isn't! It's down right embarrassing to be seen with her carrying that thing around.

2.    She still refuses to give up the snowflake robe, despite my Sissy buying her two new ones to try and break the habit. Do you have any idea how silly she looks in the morning out on the balcony in a snowflake robe talking on that pink rhinestone phone before she has even brushed her hair? I just don't have words to describe it. She says no one can see her anyway on the second floor balcony, but what about me? I see her and it is an insult to my eyes.

3.    She fell down the steps. Again. This is becoming a habit with her, biggest clutz I have ever seen.

4.    She ate a whole slab of ribs all by herself the other night. I don't ever want to have to witness that again!

5.    She sings in the shower, loudly. Did I mention she couldn't carry a tune in bucket?

6.   She clips Turdley Tuckers nails outside. We all know he is afraid of anything having to do with going outside and turns into one of those fainting goats, only he doesn't fall over just gets stiff. If she clips them inside it takes two people to hold him and both are dodging those piranha teeth. So she takes him outside and lays him in her lap, looking for all the world like she is trimming the nails of some roadkill she has picked up with him stiff as a board and all four feet in the air. The other day a neighbor stopped to talked to her while she was trimming his nails (probably wondering why she just didn't let the taxidermist do it) when all at one he rolled his eyes to look at her and she almost had a heart attack. That dog is going to get a law suit thrown on us some day, he needs to go!

7.    Now she is trapping cats. Yes, cats *shudder*, someone dumped a whole bunch of black feral kittens and Mom and a couple others have been trying to catch them to get them to a shelter for proper care and treatment. But cats? Why isn't she out looking for feral pugs to help?

8.  Has she mentioned her black eye?  Yeah, didn't think so. Silly woman got up to go to the bathroom and forgot she had shut the bathroom door and ran straight into it, between the sound of her hitting the door and the cussing it sounded like WWIII had started in the bathroom. I told her it could all have been avoided if she would just learn to use the pads like I do.

So please, someone call DPS for me and have her investigated. I don't think a good psychiatrist would be out of the question either. Just sayin'