The Way Mom Rang In The New Year! 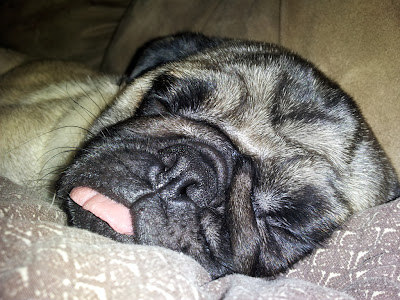 Me laying on Mom's lap before the attack.

We spent a quiet New Year's eve and I feel very fortunate that I was able to keep my Mommy out of jail. She has a graine headache. I'm not too sure what a graine headache is but I do know it makes my Mommy very sick and turns her into a troll of sorts. She wants the lights off and the sound to be turned down, she is not cooking and eats very little which in pug terms means I am getting no droppings to speak of, she hasn't blogged much and has avoided the computer monitor like Tucker avoids people. I fear she may be turning into Tucker. Barking and biting at strangers.

This became a major concern when I started noticing the symptoms:

She suddenly was laying on the couch or in the bed under the covers just like Tucker.

She started barking/yelling every time the door bell rang just like Tucker.

She became very territorial and told My Boy to keep his loud hooligan friends out of here which is clearly Tucker behavior.

She kept asking to be waited on hand and foot, more Tucker behavior.

She has been taking pills everyday, just like Tucker.

She has been wearing that atrocity known as "The Snuggie" just like Tucker does. Have I ever mentioned they have matching snuggies? It's enough to gag a pug, I throw up a little in my mouth every time I see them.

All of those things have been a concern but since she was still able to make it to the bathroom and hadn't resorted to using the potty pads yet I have been holding out hope. Then last night happened and I feel I may now have to accept the very real possibility that she is becoming turdley after all.  There was a lot of fireworks where we live. Last year I freaked out every time I heard them but this year they didn't really bother me and all I wanted to do was look out the window and watch them. But Mom, oh my God Mom! Now she reacted differently, she acted like Tucker. Mom is usually a laid back kind of person (it could be the Valium) and lives with a "live and let live" attitude about stuff like that. She always says if something isn't harming anyone she loves then she isn't going to stress over it. Last night she stressed over it. She says the graine headache caused her to do it. She did really good for the first three hours of non stop firecrackers. I almost feel sorry for that poor guy that was the opening act for the fourth hour of festivities in our parking lot. Apparently graine headaches also make you extremely fast because when that poor guy let off that firecracker she was up off that couch and out the door before I could even register the thought that the door was open and I could make a dash out of it. She left me in her dust! Imagine you're the poor guy out in the parking lot, having a few drinks with your buddies on New Year's eve and suddenly you see a crazy woman who hasn't combed her hair in days, wearing a snuggie with paw prints on it, mismatching socks (she says that was a result of not being able see the colors in the dark we are living in because of this graine headache and an attitude of "couldn't care less") run out the door screaming "If you don't stop with those damn firecrackers I am going to shove them up your ass! You have been at this for hours now, you passed ringing in the New Year about 2 hours ago. Dick Clark is already home in bed and now your just irritating me!" Poor guy was so shocked he just stared at her, couldn't even answer. She then ran back in the house mumbling and grumbling under her breath and got back under the covers like the whole thing hadn't just happened. It got very quiet outside after that, eerily quiet. Now that is a  Chupacabra Turdley Tucker "attack strangers" attitude if I have ever seen it!!! At least she didn't bite him.

I realize now that she may not be using the pads simply because she doesn't have enough room or the coordination/talent to do the "walk, sniff, circle" in a confined space. At least I don't think she can. There was a little turd on the potty pad yesterday morning and I know I didn't do it and she claims Tucker didn't either. Since all people and animals that are not mute or heavily sedated on Proponol have been banished for the duration of the graine headache and The Boy was gone that pretty much narrows it down to Mom. I will be keeping a close watch on that situation today too. 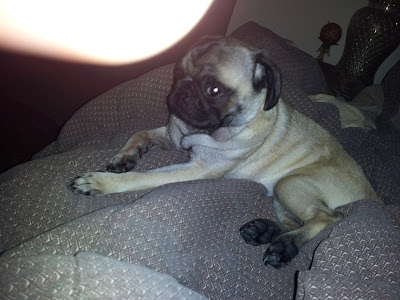 This is me after the attack. Total embarrassment! 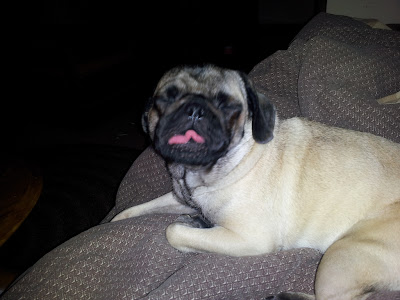 My impression of Mom's face as she flew out the door. 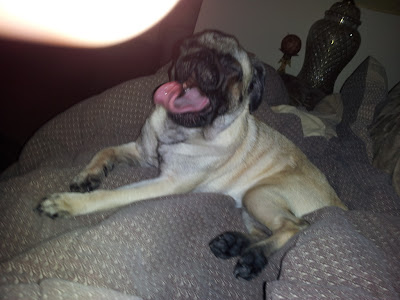 This is me as Mom was trying to explain away her bad behavior to me. Geez, I'm over it already Mom, let it drop! 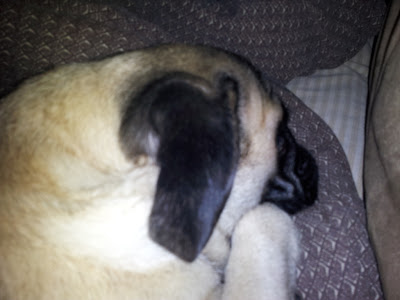 I just want to go back to sleep!
Posted by Tucker and Lola at 12:02 PM