What a weekend! Our company came and wonder of wonders they didn't even notice the clean carpet Mom obsessed so over last week. But they brought gifts! That was the important thing. I got a new lambie and a new green "Something". Mom says she will fill me in whenever she figures out what the hell it is suppose to be. Tucker got stuff too, but really who wants to hear about him? My Boy got some new game for that loud ass XBox he plays and it has even more death and destruction than the first part of the game did. Mom thinks he may be in training to be the next serial killer or interstate sniper to hit the newspapers. She says he is a Nancy Grace story just waiting to happen. Mom got gifts too. I find it amusing that she didn't analyze those gifts a little better. I think there was a personal message behind them. Either that or my Sissy is enabling Mom.  Anyway, Sissy bought her a new robe so now she can lay around the house in fuzz trimmed in satin instead of snowflakes. This is better, how? She also got some very expensive perfume. We all know you can't lay around the house stinking up everything. Somehow she just feels less lazy and more attractive when she sprays a little perfume on before taking up residence on the couch for the day. I say a bum is a bum no matter how you try to fancy her up!

There was some excitement here Friday night. The turkey tried to kill Mom. At least that is what I saw. It was in the oven and the house was smelling all pugalicious. About 3am Mom decides to go antagonize the turkey and it fought back. She pulled it out of the oven, pulled back the shiny stuff and poured some hot broth over it. Must have pissed that turkey off about right because as she was putting it back in the oven the pan tilted, the hot broth poured over both of Mom's feet, Mom screamed, Sissy thought she was being attacked by mysterious kitchen monsters and came running, she slipped in the grease on the floor and fell. Tucker and I are in heaven and having a floor licking contest all around the both of them. Mom looks at Sissy and Sissy looks back and they both just lay back on the greasy floor and dissolve into very loud laughter. This is when Sissy's fiance comes into the picture. He looks at the both of them and the mess and you can almost hear him thinking "This is what I am marrying into?". I am telling you the man had a look of pure fear on his face. Mom said he would probably sneak out before we all woke up the next morning never to be heard from again. He didn't, he was still there and I am sure he just can't wait to have Christmas with us.

The next day we loaded up all that pugalicious food and we went to Sissy #2's house for dinner. She gets #2 status in my book because she is a cat person. It's our family's dirty little secret, something we don't admit in public. I had pumpkin pie with whippy, I enjoyed it even if  The Thanksgiving Scrooge didn't give me the crust that should have come with it. I also had turkey. I almost hated to eat that turkey since I did admire it so much for putting up such a good fight the night before. But after all I am a pug and my admiration can only go so far. I also got some green beans and some sweet potato casserole, ole' Turkey Scrooge took the nuts off the top of that too. She said nuts are only good for causing trouble. She said she was NOT referring to her ex louse but I'm not so sure. After dinner and more visiting Mom, My Boy,  Sissy and Sissy's fiance came back to our house and settled in to watch movies. I just layed around the rest of the night and shared my essence in the form of farts with everyone close to me. But so did Mom (even though she did tried to be sneaky with it, ole' Tuck would stick up his nose and give her away every time) which may be the reason we were the only two laying on the big couch and everyone else opted for the floor. Me and Mom. We are a good pair. We get each other.

I did live under the threat of kidnapping for four days. Sissy and her fiance said they were going to steal me because I am so cute and cuddly. I must admit I was very impressed with all the body massages, toys, treats and kisses I got from those two! Not to mention I could do no wrong, everything I did they thought was so funny and cute. Of course I really showed off too knowing I had such a captive audience. They even made excuses for me a couple of times when I got in trouble. I'm pretty sure Mom didn't really buy the story that Sissy is the one that actually knocked the trash can over and licked the inside of all the cans that were in it.  I also don't think she believed that Sissy was the one that brought the dirty underwear into the living room and left it in the middle of the floor while company was here either. But it was nice of her to take the rap for me. They tried to sneak me out when they were leaving but Mom caught them. I had to stay with Mom, you all know her history, who else is going to appreciate and love her sluggish ways like I do? 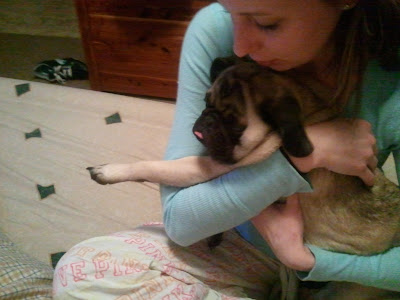 Sissy likes to hold me, she says I am like holding a rag doll. Notice the tongue? I was getting sleepy. 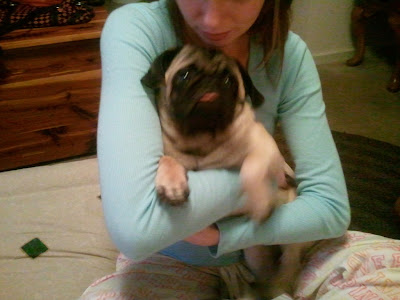 She forced me to take this picture. The evidence is the blurry foot, I was trying to make my get away. 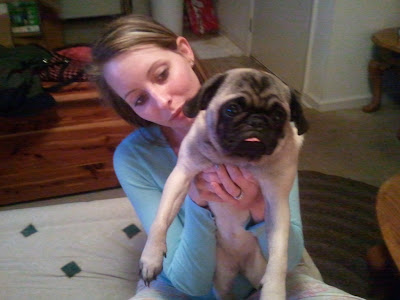 I give in, I'm too sleepy to fight the camera anymore. 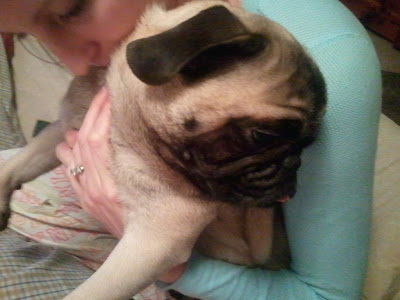 Finding it hard to hold my head up. Why won't these people let me go to sleep?! 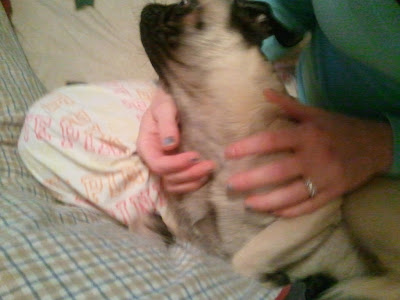 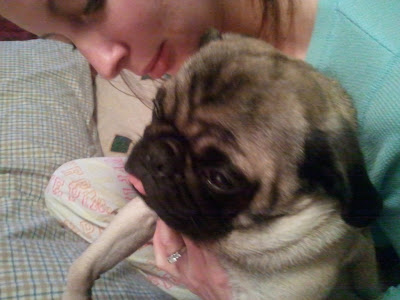 I can just sense it, she is moving in to kiss me... 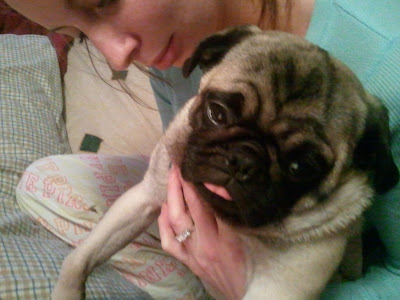 Pretty sure she is admiring my beauty here... 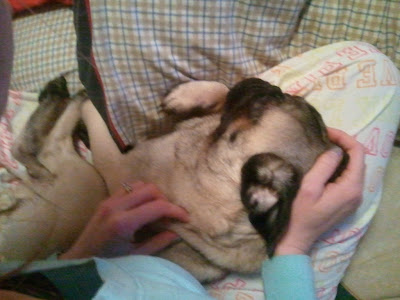 She gives up and rocks me to sleep... 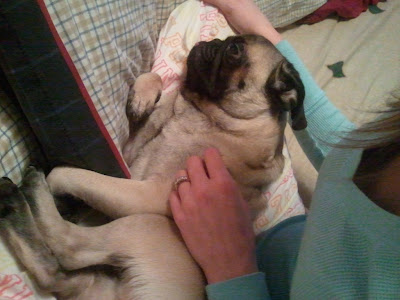 Now she is getting ready to lay down and cuddle with me. I love me some cuddles!
Posted by Tucker and Lola at 2:09 PM